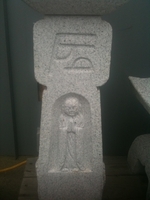 Oribe in the garden of Tracy S in San Diego

another shot of Oribe with blooming Redbud

Oribe in the garden of Tracy S in San Diego

another shot of Oribe with blooming Redbud 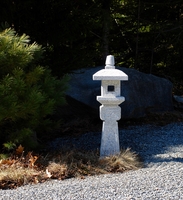 36" tall in the garden of David V in Cushing, ME 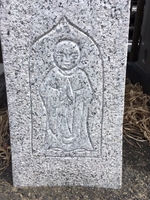 current monk style on all Oribe

Traditional design with monk image. This post has no base and is meant to be set with packed earth, gravel or concrete. 5 pieces

Note: Oribe monk style can vary from time to time.

Square opening in front and in back.

Oribe was the leading tea master after Sen No Rikyu (the father of the modern tea ceremony, 1640’s). He designed this lantern to represent the influence of Christianity as it was introduced into Japan. It supposedly represents a cross and the “monk” could represent Jesus or some even think Mary. Most people put the symbol and monk to the back so it is not apparent. This is because originally the Japanese who used it were persecuted for their new found beliefs. So says the legend.

A note about shipping damage vs. minor flaws in our stone lanterns and basins. Obvious damage/breakage is rare and we will replace any piece that suffers shipping damage OR provide a $ credit if the damage is repairable by the customer.

Minor flaws/irregularities sometimes will occur during the crafting process as most items go through a flame-thermal treatment at the end of production to give the finished surface a more consistent and natural texture. Natural stone will sometimes react inconsistently during this process and irregular surfaces will occur. We feel this is part of the crafting of these natural stone pieces and that it adds authenticity to them - setting them apart from cast or molded imitations. We do not offer refunds or credits for this type of condition and will not ship an item if we feel we wouldn't want it in our own garden!

Truly the lanterns (both Oribe and Kusaya) we purchased from you give us daily pleasure. Tracy S. from San Diego

I purchased the Oki Doro lantern a couple years ago. I have been so pleased with the appearance that I recently purchased the 36" tall Oribe. I temporarily set it up today and now look forward to enlarging my Japanese garden for it's new home this summer. Came yesterday in perfect shape and well packaged. 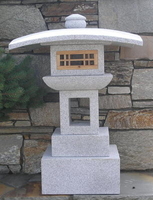